A Proper Understanding of the Punctuation Marks enables Impressive Writing. English Grammar considers these marks as the most significant for Correct Writing. Remember, a Punctuation Mark can

change the message of the whole sentence.

Broadly speaking, there are 14 Punctuation Marks listed in English Grammar. They are the period (full stop), question mark, exclamation point/mark, comma, semicolon, colon, dash, hyphen, parentheses, brackets, braces, apostrophe, quotation marks, and ellipses. We shall have a discussion on the selected ones that we use in our regular writing and need to master.

Before we step ahead to understand their usage, we must acknowledge the fact that it is Punctuation actually which transforms our words into standard and correct structure-syntax or sentences. Without Punctuation Marks, any piece of writing shall fail to convey the intended meaning.

It is like integrating the Writer into the writing. We know that we cannot get into the pages and convey the words in the same tone and mood that we have while communicating things orally. This is a valid limitation. But the alternative is to insert appropriate Punctuations and convey to the reader what actually is being said.

The Punctuation Marks functions like ‘Gears’ and regulate the speech in the written form. The end of a thought is conveyed by a ‘period or full stop’ and the interrogative tone of a statement gets a ‘question mark’ in the written version. Similarly, the excitement/unusualness is evident through an ‘exclamation mark’ whereas a quoted version is presented in “Quotation Marks”.

Punctuation Marks are like the Notations of Music. Once you understand that there has been an intention in using these marks, you can present the text into an impressive speech. I am reminded of a poem by Ernest Hemingway that is written in blank verse and see what it has as its text:

Let’s Master the Use of Punctuation Marks!

Note: Oxford Dictionary describes Punctuation  - /pʌŋ(k)tʃʊˈeɪʃ(ə)n/ - as the marks, such as full stop, comma, and brackets, used in writing to separate sentences and their elements and to clarify meaning.

A Sentence is the Expression of a Complete Thought! When we complete a thought while speaking, we pause and when we write the same thought, we end it with a full stop/period. A Sentence can be as long as the thought is. But, the placement of the full stop means completion of the sentence, per se, the thought.

There are three major principal uses of the full stop:

The comma is mainly used

Example: I have purchased two kilos of mangoes, five kilos of tomatoes and milk.

Example: If it doesn’t rain tomorrow, we will go for a picnic.

He searched for the book, but couldn’t find it anywhere.

Example: You get my point, don’t you?

Example: It was raining heavily. However, he was determined to cross the river.

Example: “This is really interesting,” she exclaimed.

Example: Yes, I agree with you.

The solution─ if it is a deemed solution─ is to get your tenant out of the house, as soon as possible.

The hyphen and the dash look alike. But in the printed matter the hyphen is made shorter than the dash.

The hyphen is used

* There is no clear rule or guideline to help us to decide which words are hyphenated and which can be used as a single word. For example,

The question mark is used as a punctuation mark to show that a direct question has been asked whether in direct speech enclosed within inverted commas or as a part of a passage of writing.

Example: “What do you think I should wear for the party tonight?” asked Seema.

Question Mark, Full Stop/Period and Exclamation Mark are considered the 'End Punctuations' as they end the sentences.

The exclamatory mark is used to exclaim over something- a dramatic confession, a warning, an expression of anger, joy etc. It is used by writers to convey an emotion to the reader.

An exclamatory mark is used

Example: What a victory!

Oh, that was a terrible accident!

What a wastage of money on these elections!

The Inverted Commas or the Quotation Marks

Inverted commas tell the reader what lies between them is direct speech. When we reproduce the words of a speaker as said originally, the speech is in the Inverted Commas. They are also used to enclose words of special significance for the writer.

Example: “Let me discuss this with your father first.” or Rajesh said, "It is easy to understand the Punctuation Marks."

The semicolon is stronger than a comma but weaker than a full stop. It is used between two independent clauses that are linked. The main function of the semicolon is to create a sequence of ideas made up of several clauses – usually connecting main clauses- as a single sentence.

Example: He checked through the heap of bank statements; he then re-checked the list of suppliers to whom he owed money; beyond all doubt, he was bankrupt!

The colon is used to indicate that there is a list

It is also used to introduce a piece of information

Example: He put his hand in his jacket pocket for his wallet: it wasn’t there.

These are used to set off material that is not very closely related to the rest of the sentence. They usually give extra information.

Example: The findings of the research (refer to Appendix 2) are quite surprising.

Katrina (a hurricane) had a devastating effect on thousands of people.

Parentheses (()) are curved notations used to contain further thoughts or qualifying remarks, according to your Dictionary. However, parentheses can be replaced by commas without changing the meaning in most cases. For example, John and Jane (who were the speakers on an annual day) both have red hair.

Brackets are the squared off notations ([]) used for technical explanations. For example, yourDictionary.com uses them when you look up word definitions. At the bottom of each definition page, brackets surround a technical description of where the word originated.

According to yourDictionary.com, braces ({}) are used to contain “two or more lines of text or listed items to show that they are considered as a unit.” They are not commonplace in most writing but can be seen in computer programming to show what should be contained within the same lines. 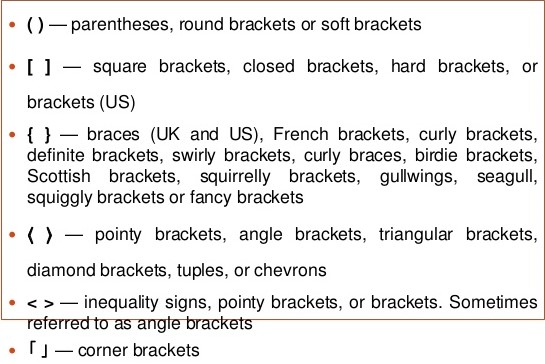 The apostrophe is used to indicate possession.

It is also used to indicate the omission of a letter in a word.

The Slash Or Oblique /

The slanting line/stroke known as slash or oblique is most often used to represent exclusive or inclusive or, division and fractions, and as a date separator in writing.

We also see the use of slash as a period sometimes in written poetry. The shift of lines is conveyed by the use of slash, i.e. the sun came/spoke of light to me/ the sun gave us fame/…

It can also be used in a fraction, particularly involving large numbers, e.g. 67/89.

A Backslash \ is used for programming/coding in computer languages.

Capital Letters are also considered a part of Correct Punctuation.

Capitals are used:
(1) To begin a sentence.
(2) To begin each fresh line of poetry.
(3) To begin all Proper Nouns and Adjectives derived from them: as,
Delhi, Rama, Africa, African, Shakespeare, Shakespearian.
(4) For all nouns and pronouns which indicate the Deity; as, The Lord, He is the God.
(5) To write the pronoun / and the interjection O.

'You Create Yourself' is the belief that drives the EklavyaParv! It is a Life Long Learning Mission with firm belief in the trilogy of Enhance-Empower-Encourage. We share learning contents on Communication Skills, EdTech, Life Skills, Blended & Innovative Learning and Insights about Education. Parveen is an EdTech Evangelist and has been working in the field of Innovation-driven Education for more than a decade. He writes and delivers training on EduSoMedia, E-Learning, OERs, MOOCs, EdTech, ICT, Blended and Flipped Learning, Academic Intervention, Classroom Makeover, Employability Enhancement, EdTech and Teacher-Student Learning. EklavyaParv is the celebration of his belief in the Learning Spirit of Mankind! Currently he is working at Amity University in Tashkent, Uzbekistan.
Grammar
BLOG COMMENTS POWERED BY DISQUS