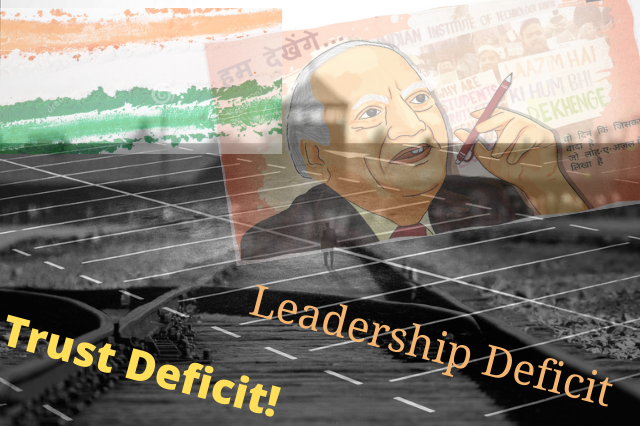 Teachers are apolitical. They are not from any religion or have a blind or fixed ideology. They are not part of any pursuit to empower someone. There is neither propaganda nor chauvinism in their motives. But, they are very much human. They do have their callings that beat in their heart. They do have the ultimate, unchallengeable and unconditional privilege to question.

Today, as a teacher who has owned hundreds and thousands of kids; who has advocated the faith in the law of the land and one who has pursued the masses to be on the side of the state, I raise this question to those who have gone missing. Those who had taken the oath to serve and lead, are nowhere to be seen.
This is unfortunately an opportunity to write a good blog. I can again raise the issues that have been integral and encashing parts of the public speeches. My trainees have won with these terminologies and the impact has been immense on the ears of judges. Today is a day when I shall raise the same 'jargon' to the highest of attention deserved.
First is the submission about Hum Dekhenge - Nazm. Because of the news and other diversions, you might have missed the essence of this song. We shall try to fathom the depth of meanings in it today. It must be very much clear that the filth-filled ears, who see communal or even communist colours in this magnum opus of Faiz, must not read any further. I congratulate them (in a mock-serious mode) on the death of reason and rationality. At the same time, I pity the children who might be under their upbringing.

Faiz Ahmad Faiz, a proud Hindustani (Neither an Indian nor a Pakistani) has an oeuvre we have lived on. If you have never read Faiz, believe me, still, you have lived on his legacy. From Romance to Protest, it is all the same. Don't you feel that being romantic is what a rebel is? We cannot narrow down romance to merely material love. It is beyond-platonic and has its roots in our intellect, collective intellect in fact. As an educator to youngsters for more than a decade and in toiling to make a difference to their 'thinking, I have realised that we teachers could do all that was needed to correct the world. We did not and now discipline is something that is one of the most animated things. The inculcation of 'Positive Discipline' failed to come into existence. Now the kids do not question, not even in academic matters, forget the life-related things. The disconnect and discord seem to have harmed a great number of learners. We have lost a battle unfought. Still, hope is immortal and 'Will to Meaning' in life leads us to attempt again. Keep your self-belief close to your heart, the same shall transform into the key to this prison and we shall be free again.

Hum Dekhenge - is a Nazm that questions, not the rulers, but also the ones who might come to occupy the chair in future. It is a constitution in itself that says that WE Will Surely be Witness to The Day you have promised. The lyrics reject any religious obsession and put the common man to the topmost place in the rule. The political supremacy, a kind of divine immunity that we see our leaders enjoying even in the pandemic, is something summarily rejected in this creation.
The Khalq-e-Khuda - The Common Man - The Will of Our own Inner Self and Soul shall ultimately rule. The conscience shall be the Owner, the Most Powerful to lead us all. That's what I am honest about. The philosophy of Eklavyaism seeks to reject the stereotypes and also denies the status quo. We know we have that immense amount of untapped power in us. Once channelised in the right direction, it shall add to our wellness. This much optimism and positive outlook sometimes sound like a subtle madness.

This madness and goosebumps also come when you see Faiz, face to face, eye into the eye through the words. Seems, if the so-called Messiahs of the Modern Market of Political establishments all around the world ever get to even denote the words, they will fear a lot. And if they dare to comprehend the connotations that will show them the worst they given to their own people.
Hum Dekhenge, Laazim hai Ke HUM Bhi Dekhenge is a song to Unite us, Connect and Empower the masses. I do not see a country being there without the 'people' who make it what it is. A national character is what Hum Dekhenge calls for. The same way we read 'Hum Bharat Ke Log' or 'We the people of India", each song-poem-nazm that has been written to shake-awake-protect the people is a treasure to possess. Find them all and keep their words close to heart; these must give you light to see better.
Spend some time listening to Iqbal Bano or Tina Sani or the Coke Studio version and anyone singing this, do not even try to understand the meanings of words, the song will spell its own spell.

This song comes into existence when there is a particular type of deficit. Because I had to encounter this deficit and it made me uncomfortable, I had to invoke Faiz Saheb.

Trust Deficit is all-pervasive. It is omnipresent as if it has the godly existence or some heavenly franchise being awarded to it. Sam Manekshaw, the field marshal spoke of this deficit quite prevalent in our country. Do you really trust your leaders, bosses, colleagues or even neighbours? Do you have confidence in your parents or children? Do you feel a life-long appreciation for your mentors, friends and relationships? A small delay, a minor fumble in giving an affirmative to these questions speaks for itself. People and the ones who lead us are reciprocally afraid of each other. Strange that is, yet true. This causes a great amount of loss to the national character. Nationalism shall never be adamant and obsessive. However, when we are led into the leadership deficit by the trust deficit, we are in a self-destructive mode. A lethal one-a a fatal one.

There is something else as well.

I have remembered these lines since the times of early school days when this poem was taught, in the curriculum. Can you believe that! I cannot believe that we teach Paash, Premchand, Ramdhari Singh Dinkar, Sarveshwar Dyal Saxena, Frost, Whitman, Gandhi, Mandela, and so many other change-makers in schools but fail to get awakened intellect. The false service is causing is a slow death. The words need to come from the depth of heart.

I have this strange obsession with the words of the Preamble to the Constitution of India. 'We the People of India" ignites something special and adds to the relief of the mind. It does carry the hope that we do have a law, if followed, can ensure peace and prosperity. And when it is not served, we need to ensure that we raise our question and tell those in 'power' Hum Dekhenge.

Our country, our motherland is because we are there. Being a law-abiding citizen, I do have my questions and complaints. But, more than the laments, I do have duties and responsibilities. I learnt this simple thing that by doing my truthful best in what I do in my occupation, I am serving the country. Each day, I try to deliver the same.