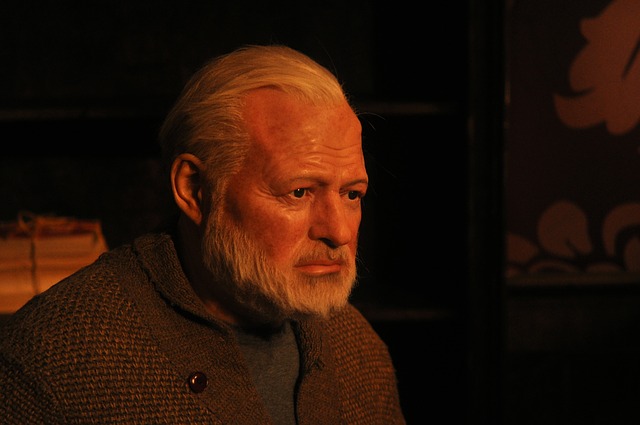 Ernest Hemingway, the mythical persona of American Literature, has been a Muse to me. I invoke him whenever I need to bring something filled with emotional maturity. Hemingway fought all his life with himself. That is what we all do but give up quite early. He lived to prove things to himself and bothered least of the world's madness.

Ernest Hemingway, born on 22 July 1899 died at the age of 62 in 1961. His literary contributions are chronicled between the 1920s to 1950s. Hemingway wrote of life and the colours and complexities of life. Some of his quotes, said through his characters in his masterpieces are self-explanatory of the genius he had in him:

I did my M.Phil. dissertation on him and studied a very less touched aspect of Survivor's Guilt. Hemingway knew how to manage his mind and the fluctuations of the mind. He did the best use of the blood that came to his heart. He created characters who live a life that breathed in Hemingway.
It is not a special thing in your life that you get to study a writer and identify yourself with his mind and heart's expressions. His depression was a pleasant thing in a strange way. The realisation of Catharsis wins everything for you. The moment you have that Wow feeling at his subtleness of expressions, Hemingway enters your heart. He remains there forever then.
With "a man can be destroyed but not defeated" and the Iceberg Theory, he gave us how to open heart in words. He bleeds through the 'Lost Generation' in his works.
I think of Santiago as much as I think of Hemingway. Paulo Coelho took Santiago from Hemingway and made him a young boy. The Santiago who struggles for acknowledgement is made to search his destiny and purpose. It is beautiful to find out that Coelho reaffirms my belief that Hemingway indeed has something that demands sweat to unearth. Hemingway's Heroes don't just lose a life, they bounce back and the journey of their re-incarnation into a winner or Changed Being is itself a reward.
The Muse, Hemingway, was awarded a Nobel for Literature in 1954. He is still one of the most celebrated authors of the century but his acts of manifesting anger and Sense of Loss add to the bipolar greatness.
I have been waiting for the results of PhD entrance and presentation that I gave last week. I presented the PhD plan in English literature and on Hemingway under the following title:
Quest for Self Discovery in Selected Novels of Ernest Hemingway and Paulo Coelho.

We all are in search of our own best version. This quest makes us breathe endlessly unless our body gives up. His works juxtaposed with Coelho's modern philosophies are so unique in the treatment of human predicament. Both the legends demand us to be loyal to what they say and what destiny is.

I wish to seek blessings of the Literary Muse aka Hemingway in his own, Birthday!

'You Create Yourself' is the belief that drives the EklavyaParv Life Long Learning Mission. The trilogy of Enhance-Empower-Encourage motivates us and we share learning contents on Communication Skills, EdTech, Life Skills, Blended & Innovative Learning and Insights about Education. These resources are Open Educational Resources (OERs) under CC-BY-NC-SA licence. Parveen is an EdTech Evangelist and has been working in the field of Innovation-driven Education for more than a decade. He writes and delivers training on EduSoMedia, E-Learning, OERs, MOOCs, EdTech, ICT, Blended and Flipped Learning, Academic Intervention, Classroom Makeover, Employability Enhancement, EdTech and Teacher-Student Learning. EklavyaParv is the celebration of his belief in the Learning Spirit of Mankind!
Life Lessons
BLOG COMMENTS POWERED BY DISQUS