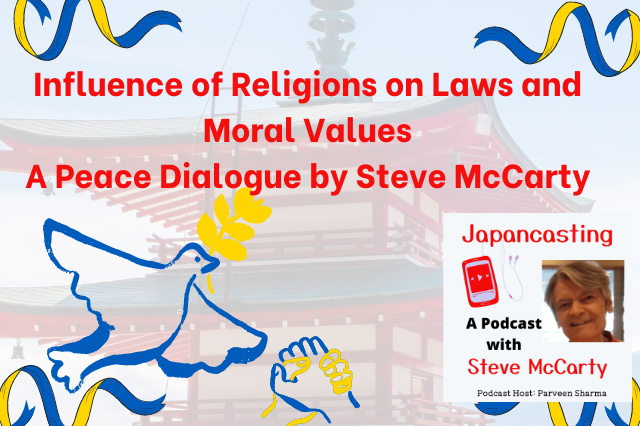 This is a 7-minute stage play performed by four first-year students at a women's college in Japan. This peace dialogue shows how religions have influenced the laws and moral values of their societies. It could be useful for studying world religions, laws, values, or English as a Foreign Language (EFL).

You can read the script while listening:

The Japancasting Podcast is available online on Spotify, Apple Podcasts, Google Podcasts, Gaana.com, and many other leading platforms.

Listen to the Episode here: https://japancastingpodcast.hubhopper.com/episodes/31158890

The primary home page of the show on Hubhopper is: https://japancastingpodcast.hubhopper.com/

Christian: Welcome to our panel discussion here in California. I’m a Christian.

Jew: I’m from Israel. I’m Jewish and our religion is called Judaism.

Moslem: I’m from Saudi Arabia. I’m a Moslem and our religion is called Islam.

Buddhist: I’m from Japan. I’m a Buddhist and our religion is called Buddhism. We also have a native religion called Shinto or Shintoism.

Christian: Today we will discuss how religions have given laws and moral values to each society.

Jew: We usually don’t think about it, because religion is in our common sense.

Moslem: Yes, it influences our way of thinking and how we live every day.

Buddhist: But Japanese culture was influenced by India, China, and Korea. Besides Buddhism and Shinto, we have folk religions. For example, the Shichifukujin are seven lucky gods from China, India, and Japan.

Jew: It is very clear how the Ten Commandments of Moses are related to laws. You must not kill other people. You must not steal, including information. You must not lie. So to tell the truth is an important moral value. Also, you should not want romance with the husband or wife of someone else.

Christian: All people can experience envy or jealousy. We may want something that seems better than what we have. Someone we know may have a rich husband or a beautiful wife. So Christians pray to stay away from temptation.

Jew: That’s very true. The Ten Commandments and other religious rules are there because various temptations are natural.

Moslem: The first laws were by Hammurabi over 4,000 years ago in Babylon. Now that area is in Iraq. In Sharia or Islamic law, if someone steals, the hand of the thief should be cut off. Hammurabi said an eye for an eye, and that seems fair to us. The punishment fits the crime. If everyone obeys Islamic laws there is no need for envy or jealousy. Therefore, following laws, not freedom or liberty, makes people happy.

Christian: In the United States we have many laws, but people also want freedom and liberty. In our religion, there should be mercy or compassion. We should not hurt people unless it is necessary, so we can’t imagine cutting off someone’s hand. Islam seems to have very strict laws. For example, there is the stoning of married women if they are with another man who is not their husband.

Moslem: Well, the Sharia law is only so strict in some regions. Most Moslems have good common sense. Men can hit their wives if they do not obey, according to the Koran, but of course, it is better not to hit your wife.

Jew: What about Japan? Almost everyone in the world has only one religion. If religion influences laws and moral values, how can Japanese people have more than one religion?

Buddhist: Well, the native Shinto religion influences a part of our lives. On special occasions, it gives us a festival spirit. And because purity is important in Shinto, we are very clean, but we don’t like to mix things.

Buddhist: I think we are improving, but we must work harder on English for International Communication.

Jew: What other religion has guided Japan’s laws?

Buddhist: Around 1,400 years ago there was a prince of Japan named Shotoku Taishi. He learned about Chinese laws, and he had Koreans teach him about Buddhism.

Moslem: Didn’t he build the Horyuji Temple in Nara? It’s famous as the oldest wooden building in the world.

Buddhist: That’s right. And he also built the Shitennoji Temple in my hometown of Osaka. Let me take you there some time!

Buddhist: Anyway, Shotoku Taishi made the first Constitution of Japan. The laws came from Buddhism and Asian cultures. So that was a time of internationalization in Japan.

Christian: I see. The different religions show that there is a tradition of internationalism in Japan. Thank you all for joining our panel discussion!