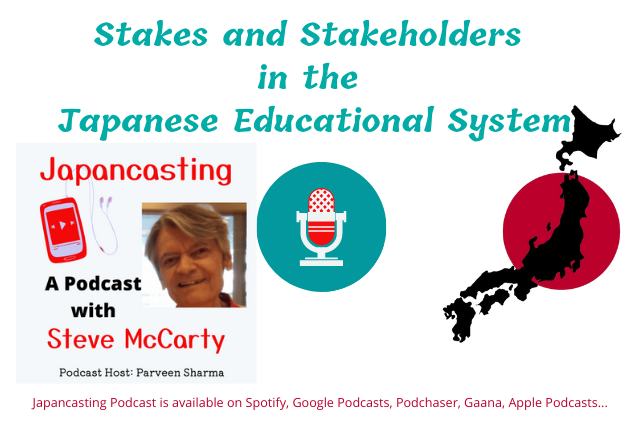 Stakes and Stakeholders in the Japanese Educational System

This is a 26-minute presentation on Japanese education given to American schoolteachers visiting Osaka Jogakuin College. It is a critical view, and the situation has become more relaxed overall since the time of this presentation, which was delivered in 2005, but the fairly complete picture of factors affecting education in Japan is still a relevant set of issues.

The presentation proceeded according to the outline below, which can help listeners understand better.

* Everyone's perceived value or worth

* Big company dominance and attendant difficulty to be an entrepreneur

* Absorption of individuals into groups

* Traditions are often stronger than laws

* Thus, education is a strong predictor of lifelong income, particularly for men

* For college graduates, one's highest degree and the prestige of a university is a lifetime badge

* Without a college degree, it is difficult to get hired for white-collar work

* People tend to associate with peer groups, which usually arise from their educational background

* Self-image tends to depend on acceptance by one's peers and superiors, who view the person partly in terms of educational background

* Although the system is a meritocracy, in theory, advantages can be bought, such as extra lessons for one's children to succeed in the education race

* Connections formed in school can be a key to advancement, as former classmates or teachers can open career doors for someone they favor

* For matrimony, parents check a potential daughter-in-law's written credentials with a view to her family's status being equivalent to or higher than theirs, or gauge how promising a potential son-in-law's career is according to what schools he has attended

* The sphere of action of Japanese people is confined to their ethnic group unless they achieve foreign language proficiency much higher than average in Japan, which would start to open the world to them

* Empowerment by technology or finding out their rights, entitlements, and so forth is largely a matter of education, whether formal or informal

* Self-improvement or self-realization, where differences or uniqueness may be viewed as a threat to group cohesion, is also largely a matter of education

* Happiness, and what have you … is what is at stake in the educational system

Who has a stake in the educational system? Everyone in the society does, including foreign residents. What groups, in particular, are stakeholders?

* Flag and anthem forced on teachers

A new personal information privacy law restricts what teachers can do

* sole accreditation authority, which occurs in advance of offering an educational program

* Copious rules and regulations for schools and universities, especially for public schools

* Defines and narrows the scope of innovations in teaching methods, content, and technology

* There is a new system to evaluate colleges and universities, not peer accreditation but external evaluations by Ministry appointees

* Teachers' unions tend to be leftist and resist the enormous controls placed on schoolteachers, but have little power to do more than shame the government with public pronouncements

* School administrators are mostly older men, with women represented more at the elementary school level, and they are obliged to enforce rules handed down from the Education Ministry or their Board of Education

* PTA associations are nearly powerless and tend to do the bidding of school administrators, but housewives, in particular, contribute to school events and make friends through the networking

* Taxpayers have a stake, and an increasing number of workers without children resent the inequity of subsidizing families with children, but the government ideology of monocultural harmony succeeds in stifling most dissension

* Losers in the education race, however, in rare cases strike back by murdering children

* Companies that sell training for credentials or tests thereof, correspondence education, after-school cram lessons for all-important entrance examinations, or various lessons such as English conversation are big winners benefiting from the educational system, a huge industry that is probably worth more yen than the GDP of most countries

* The media have grist for their mill in the great public interest in educational issues, and they advocate liberal or conservative positions on education in their editorials

* Foreign residents, including ethnic Koreans and Chinese born and raised in Japan, have a stake in bilingual education, biculturalism, and their human rights in face of some prejudice and discrimination from the government and citizens

* Foreign governments, particularly in Asia, take issue with government-approved textbooks that whitewash Japanese atrocities in World War II, although their own textbooks are also biased, e.g., by not admitting Japan's peaceful post-War contributions to their own country's development

* Lest they be forgotten, the students on the receiving end of an authoritarian educational system are also stakeholders, whose vice is to want to have fun like children everywhere

Here is the episode for you to listen to: