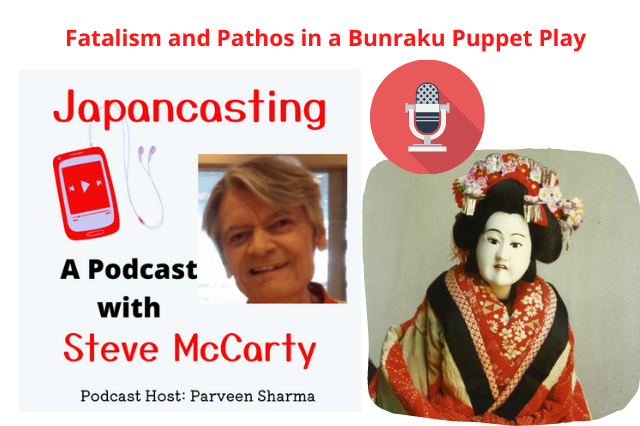 Fatalism and Pathos in a Bunraku Puppet Play - Japancasting Podcast: 03

This podcast briefly summarizes and suggests discussion questions about the Bunraku story “Keisei Awa no Naruto.” Anime fans are familiar with Naruto, but it is actually the port city on Shikoku island nearest to the Osaka-Kobe area on the main island of Japan. Awa is the old name for Tokushima Prefecture, where this Bunraku is still performed. A puppet play would be an entertainment fit for a child, you might think.

But this is a story of the utmost sadness or pathos of the human predicament. It is also similar in a way to the tragedy “Oedipus Rex,” the play by Sophocles in ancient Greece. Oedipus could not escape his fate, and neither could this poor family.

Listen to the Episode:

Podcast Script: Fatalism and Pathos in a Bunraku Puppet Play

Lisen on the Hubhopper Japancasting Podcast Site as well.

A puppet play would be an entertainment fit for a child, one might think. But this bunraku play is as sad as "Tokyo Story," the old movie by Ozu Yasujiro that film critics have called the greatest movie of all time. It also reminds one of Oedipus Rex, the drama by Sophocles in the Golden Age of Greece, but without any Freudian connotations. Oedipus could not escape his fate, and neither could this poor family.

This bunraku puppet play known as Awa Ningyo Joruri is performed on weekends by local women in Tokushima Prefecture on Shikoku, the pilgrimage island of Japan. The title is usually Keisei Awa no Naruto, Act 8. It is a 30-minute public performance to the accompaniment of recorded music and songs. The story is briefly summarized as follows:

Jurobe and his wife 0-yumi had long since left their home in Awa Province in search of a stolen sword - a precious sword that belonged to their master.

Set a thief to catch a thief, and Jurobe was now falling among thieves. One day he, trying to rob a little girl pilgrim of silver coins, choked her to death. The girl was soon found to be his own daughter O-tsuru they had left behind when she was only three. O-tsuru, who had been in the care of her grandmother, was then making a pilgrimage around the thirty-three Kannon temples, wishing to find her long-lost father and mother. O-yumi, her mother, also had met her on the same afternoon when she heard the girl singing a pilgrim song. It was indeed an excruciating decision for her, because of their ignoble estate, to let her little girl go away without telling her that she herself was her mother. Soon after their sad parting, the girl was found killed by Jurobe, her own father.

Discussion Questions: Do you know the story of Oedipus Rex by Sophocles? Do you see any similarities in this bunraku puppet play? Have you heard of the Japanese term mono no aware? It may be translated as a sense of pathos, which could also be seen in the movie "Tokyo Story." Do you think so? Don't you think this puppet play has elements of fatalism and pathos? Or do you think it just means "Don't be down and out"? Finally, what purpose could such a puppet play serve?

Japancasting Podcasts by Steve McCarty are mostly short, free podcasts giving insight into Japan. There are lectures, interviews with professors, English or bilingual performances by students, and lessons that schools or universities may use. For everyone interested in Japan, including learners of English or Japanese.