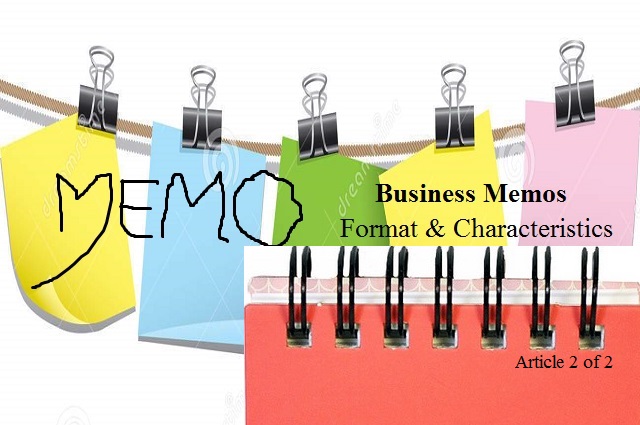 Oxford Advanced Learner’s Dictionary says: Memo is an official note from a person to another in the same organisation. It is a REMINDER to the office or the authority to do what they are supposed to do. As both the parties are accountable to each other and are well known, being part of the same working mechanism, very few formal elements remain with the information conveyed.

(Important Note - The Format and Rules to Write/Compose these things CHANGE according to the respective boards or evaluation agencies - please refer to the latest FORMATS as well.)

Unlike letters, Memos are used for the informal (yet formal) exchange of information between co-workers.

Although e-mail messages are now used instead of memos for most inter-company communication, memos are still suitable for notes sent to people higher in the company hierarchy, especially in conservative companies.

The memo is also appropriate for lengthy, formal communications to coworkers that may eventually be circulated to your supervisors or to contacts in other companies.

Most single-page memos are organized into three parts:

In a short, informative memo, readers should never come away confused. They should know exactly why you wrote the memo and what, if anything, you are asking them to do. 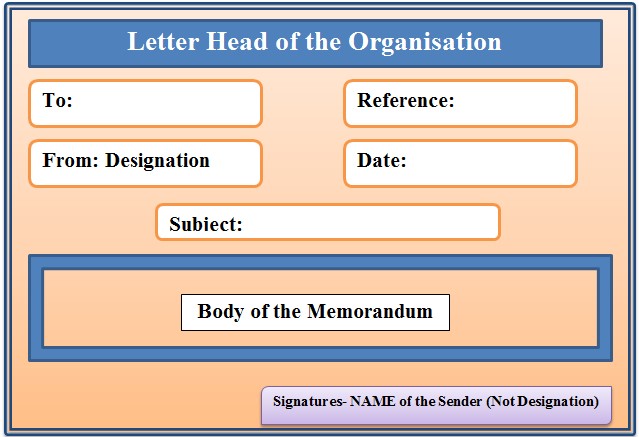 It is reinforced that the organisation decides the format (arrangement of the components) and many times there are printed forms to write a memo. These forms carry the letterhead of the organisation on the top of the page. As placed above, there are mainly four components. However, some organisations put the subject line before the body and in the four elements, they put ‘Reference’- a number assigned to the Memo, as done in letters.

The heading of a memo consists of

Although usually given in this order, these elements can be formatted in a variety of ways according to the organisational formats and working.

The elements of the date may be arranged in either a month-day-year or day-month-year sequence (see Dates). The name of the month, however, should always be spelt out.

Unless your workplace is very informal and you know the recipients of your memo very well, use both a first and last name in the “to” and “from” lines. If you list more than one recipient and they are unfamiliar with each other, you may add a title after each name. (Insert a comma between each name and title and a semicolon between all name-title pairs.) Whichever style you choose, use it consistently for all of the names listed.

If you list the names of several people in the “to” line, order them either alphabetically or by their position in the company.

The subject line is one of the most important components of a memo. Most recipients will look at the subject line to determine how much attention to give to your document.

Write subject lines that are short and specific. At a glance, they should give readers a good idea of what topics the memo covers. A vague subject line tells the reader too little; a wordy subject line, too much.

A subject line should not be longer than one line. To help keep it short, you may omit unimportant words as long as the meaning of the subject line is still clear. Label the subject line using the word Subject or Re (for a reply) followed by a colon. Capitalize the label and every word in the subject line except for articles, conjunctions, and prepositions of fewer than five letters.

Your company may have memo stationery that arranges these elements in a particular order or format. If not, use either a memo template provided by your word-processing program or one that you design yourself.

The arrangement of the elements of a heading can vary, but most commonly each appears on its own line, aligned with the left margin, in the order listed above. The heading is often double-spaced but may be single-spaced to save space in a longer memo.

Note that each line begins with a label followed by a colon. The labels may be set in all caps or with only the first letter capitalized.

For emphasis, the labels may also be set in bold type.

The body of the memo should be separated from the heading by at least four line spaces. To emphasize the break between the heading and the body, consider inserting a thin rule, or line, between them, stretching the width of the text (see Rules).

Single-space the lines of each paragraph, and insert a double line space between paragraphs. Do not indent the paragraphs.

Going by the convention of making Memos, less letter-like, signatures are not done at the bottom. The ‘to’ segment informs the receiver about the name of the sender. As they are in the same office, more details are not needed.

Although you may sign a memo below the final paragraph as you would a letter, traditionally a sender writes his or her name next to the “from” line in the heading.

Like a letter, a memo may end with the initials of the typist, a note about enclosures circulated with it, and a list of people who received carbon copies of the document.

Until recently, the memo was the preferred format for nearly all written communications within a company. Although e-mail is now the communication tool of choice for brief, informal notes between coworkers, memos are still best for more formal intercompany messages. Memos are appropriate for messages addressed to people of high rank in the company or messages that may later be circulated to customers, clients, or others outside the organization.