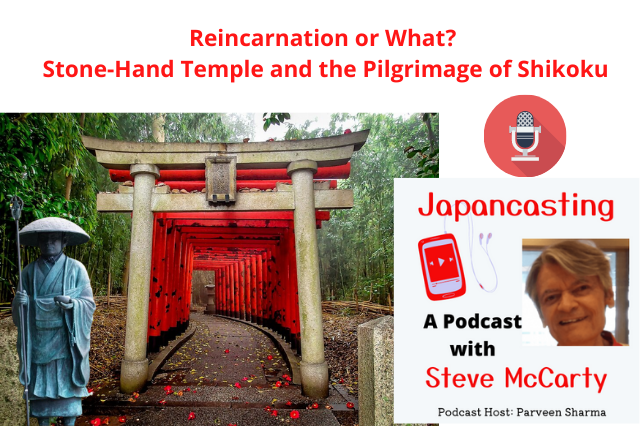 Reincarnation or What? Stone-Hand Temple and the Pilgrimage of Shikoku

Prof Steve McCarty brings yet another podcast in the Japancasting journey. Moving from Folk tales to Puppet Art, he has started making us mature learners of Japanese Culture. The special feature that invites us to listen to every episode is the global perspective of the talks. Prof Steve relates his content to everyone. let's listen to one more fantastic work.

A gripping legend about the origin of Japan's most famous pilgrimage seems to prove reincarnation. This five-minute podcast recounts the miracle story and then poses discussion questions, which have been used educationally with groups to get at the underlying purpose of the legend.

Reincarnation or What? Stone-Hand Temple and the Pilgrimage of Shikoku

Script: The Legend of Emon Saburo (listen to the podcast to hear the introduction and discussion questions as well).

Long ago there lived in this neighbourhood a man called Emon Saburo. He was very rich, but all he wanted was to be richer still. One winter day a wandering monk came to his gate, prayed, and held out his begging bowl to appeal for food. Saburo coldly refused him. The next day the same priest came again, but Saburo angrily drove him away. But the priest kept returning. On the 8th day, Saburo went at him with a stick, and struck him, dashing his bowl to the ground. The priest came no more. But on the next day the eldest of Saburo's sons died, and the next day another.

Eight days passed, and every one of his eight children was gone, to his grief and horror. Saburo then realized how wrong-headed and evil he had been. What he had to do, he determined, was to go and find that holy man and beg absolution. Soon he was following the monk's trail, asking for alms, begging for food himself every day. He went around and around Shikoku Island for four years but in vain. Having already made 20 rounds, he decided to make one more round in the reverse direction, instead of trying to catch up with the monk.

His health was failing, but he had to keep searching. On his way to Shozan-ji Temple deep in the mountains, Saburo fell down, ready to die. At that moment, Kobo Daishi, the priest he had been searching for, appeared before him. The saint, knowing everything, forgave Saburo, saying his sincere repentance had washed away his sins.

Greatly relieved, the man was about to close his eyes. Then Kobo Daishi asked if he had a last wish. He answered that he would like to be reborn as the lord of Iyo, his home province, to have the power to do great good for his people. Daishi picked up a small stone, wrote something on it, and pressed the stone into the dying man's left hand. Sometime later the wife of the Lord of Iyo gave birth to a baby boy whose left hand would not open. They tried everything but they could not open it. At last, they called in the head priest of their family temple Anyo-ji. He chanted powerful prayers and finally the baby's hand opened. Inside was a stone and on it was written "Emon Saburo Reborn."

To memorialize this mysterious event, the name of the temple was changed to Ishite-ji or Stone-Hand Temple. Believers can see that stone in the temple's Treasure House. Because of this legend, Emon Saburo, who went around and around Shikoku, searching for Kobo Daishi, is considered to be the first to have made the Shikoku Pilgrimage.

You can subscribe to the Japancasting Podcast on Podchaser or Subscribe/Follow on Spotify. The Hubhopper site is: https://japancastingpodcast.hubhopper.com/