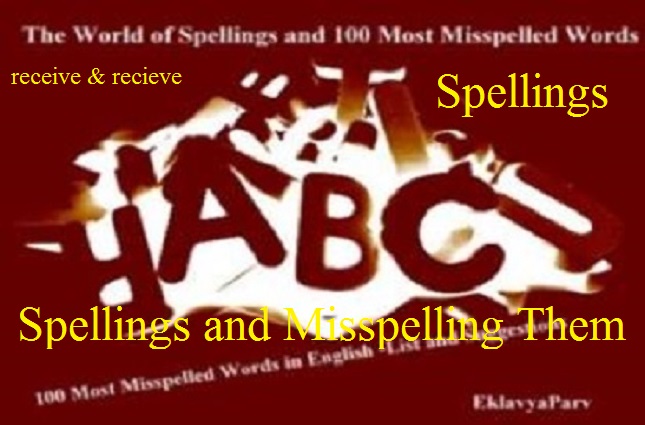 There is one important aspect in all languages: Spellings and this is perilous as we have forgotten the art of Correct Spellings. There was a time, a few decades back only when accuracy in spellings was the criteria of being linguistically qualified.

Linguists and thinkers have always stressed the significance of spellings in languages. However, there has been a constant fall in the 'corrective state, of spelling.

As we are concerned here about the Spellings in English Language, it is to be noted that the conflicts-clashes and differences in the varieties of English have added to the downfall. It seems that nearly one-fourth of the errors are credited to the differences in BrE and AmE (namely British English and American English). Spellings have been an area of cold war among language users and experts all over the world.

There have been continuous demands for Spelling Reforms as a more liberal approach is demanded. None can deny the fact that a language has to survive as per the comfort of the users-not the scholars who are always right. The matter of Spellings is acknowledged by experts and the following lines from Oxford resources speak truly of the encounter: "While printing has led to the establishment of a standard spelling system, the private spelling practices of diaries, letters and journals have continued to show considerable diversity up to the present day. The role of publishing houses as the gatekeepers of the standard is coming under increasing pressure today, as private spellings are now diffused more widely via websites, blogs, tweets, emails and other forms of unmediated online communication. There is a tacit acceptance that variant spellings are acceptable in such contexts and consequently the grip of the standard has begun to be loosened."

Another Paragraph says: "While spelling may pose many hurdles for unwary learners, it is by no means clear that it is the reason for comparatively low levels of literacy. Calls for reform today often draw on exaggerated and alarmist claims about the difficulties of English spelling, making unfounded links between English spelling and youth illiteracy and unemployment, and other social ills. Claims that more transparent spelling systems have resulted in higher levels of literacy in countries like Finland and Spain, where there is a close relationship between spelling and pronunciation, are based on intuition rather than evidence, and ignore the wide range of social and educational factors that inevitably impact upon early literacy."

Modern-day English is 'Adaptive', but when it comes to the Formal Examination by various institutions/bodies, the standard spellings are followed. In our case, in India, we are required to follow the British Spellings-Oxford Dictionary spellings. The slightest alignment towards the US Spellings (i.e. Honour becomes Honor, Colour is Color etc.) can invite an objection from the observers. A list, collected out of the nearly 2 billion words of real English, is provided to note the Words commonly misspelt and the 'Problem Area' in the word has also been given. These words are common to all age groups, so, there is a possibility that one may feel, a few words are very simple to make an error about. Still, we need to remember about spellings: "What is easy to see; is easy to Miss."

Tips: Other than the permanent panacea to curb the venom of misspellings, which is 'Knowing the Correct Spellings', one can look for Exercises, Quizzes, Puzzles in News Papers and Magazines, Smartphone Apps and Software, Books and 'Open Eyes' can help a lot to minimise mistakes in Spellings. The Context of Usage plays a vital role, so be aware of the context of usage and opt for the right one, if not the correct one according to some other standard. See the Collection according to 'Oxford English Corpus' and Spell Better: (Material can be accessed at Oxford Dictionary.)